Chicken Shops. Those weirdly reassuring, often nostalgic, sometimes regretful but ultimately fondly-held emblems of the contemporary cultural world. Here in the Human & Cultural Practice, we’re prone to a trip to the chicken shop as much as the next person. Whether it’s a shameless stop-off on the way home after a big night, or a solo visit on a quiet, can’t-be-bothered-with-cooking Sunday evening, we’ve all been there: standing in line, debating whether 6 or 9 hot wings will suffice under the glare of grey lighting.

So it’s no surprise that KFC’s latest advert – a gently mocking but totally charming ode to chicken shops across the land – caught our attention. The advert follows a man described as ‘the original chicken don’ (a title that many no doubt would contest) as he whizzes through an alphabetical tour of chicken shops, from AFC to ZFC, before returning to the original: ‘there’s only one colonel in Chicken Town’. It is of course, KFC. Alongside the video, a print ad on bus shelters and newspapers shows this milieu of imitation eateries with the tagline: ‘Guys, We’re Flattered’. It is a charming example of a brand looking at its own category in a new way, and that commends itself in a way that doesn’t feel overly self-aggrandising or out of touch. 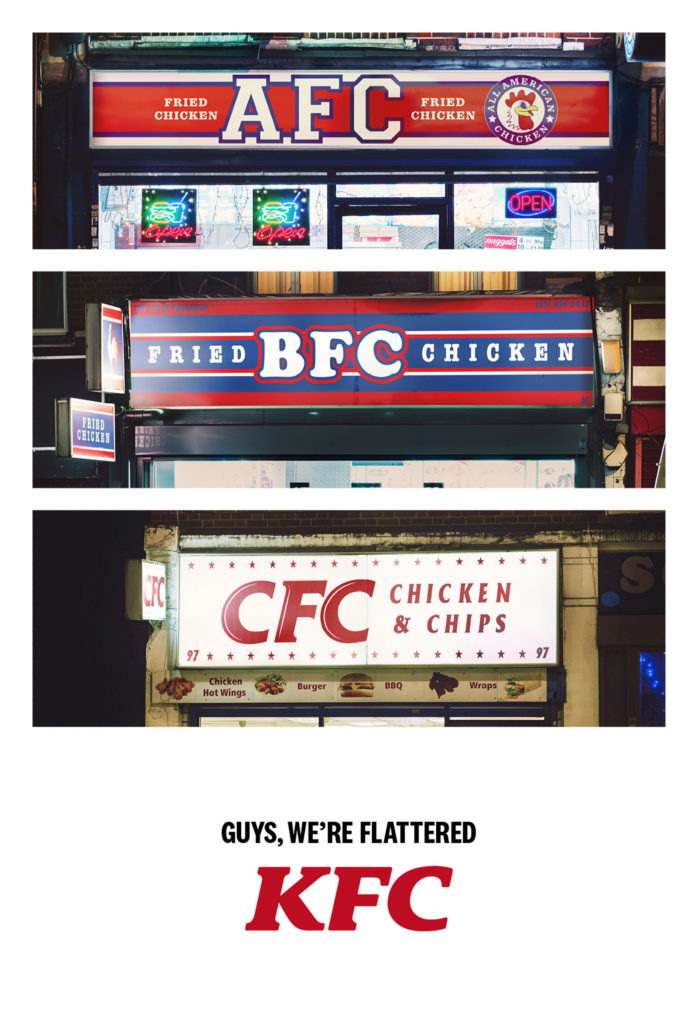 They’re not the first brand to tap into the chicken shop as hubs of contemporary culture. Nike’s ‘Nothing Beats a Londoner’ advert of last year at one point sees grime star Giggs as he sticks his head out of South London’s finest chicken chain Morley’s asking ‘What’s wrong with Peckham?’ It was a campaign that was highly praised for its sense of authenticity and real, local insight into Londoner-ness.

Delve a little deeper and you’ll find that behind these bigger brands, the cultural cachet of the humble chicken shop lives in all sorts of corners of the Internet. In her series Chicken Shop Dates Amelia Dimoldenberg interviews urban music artists in eateries across London. Or there’s YouTube restaurant reviewer sensation ‘The Chicken Connoisseur’, who self-identifies as ‘a food critic for mandem who care to know what the finest chicken restaurants in London are and where to find them’, and whose series ‘The Pengest Munch’ has over 50 million views.

With their humility, their understated charm, their complete lack of pretension, chicken shops have piqued mainstream interest and KFC have reflected these local spaces, which are not shiny and glamorous but real, idiosyncratic community cultures. We can’t wait to see how other brands seek out hubs of locality as a way to demonstrate deep-rooted understanding of the communities they serve, and ultimately, their authenticity.

Retail IQ from Kantar is an online insights delivery platform with access to exclusive robust data-driven research that looks across market, shopper, and customer trends to present the most accurate view of the top global retailers and markets. We focus on the implications that are driving change across retail — today and into the future.

MONITOR from Kantar delivers foresight on the consumer marketplace to help the most innovative businesses in the world anticipate change with confidence. Featuring a mix of provocative thought-leadership, rigorous data and on-demand guidance, our strategic thinking delivers the consumer-centricity businesses need to stay on the leading edge of change.